Blog - Latest News
You are here: Home1 / Bulletin Board2 / Listening Hearts Launches its Ministry into the Future 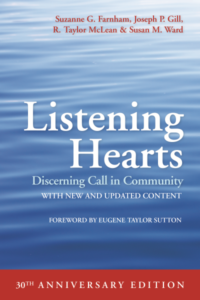 In June of 1991 Listening Hearts came off the press with nine concise chapters of distilled wisdom, gleaned from spiritual literature on discernment of call in community, spanning the centuries. In clear everyday language it made what had been the preserve of monks, nuns, and ordained clergy accessible to the average reader.

Within a year the book had attracted readers across the North American continent and spilling over into South America. A year later it was listed as required reading for the London Yearly Meeting of Friends. It was being used by congregations, dioceses, and seminaries. It was speaking to a spectrum of people ranging from high school students to bishops.

In addition to the nine chapters, the book featured Appendices of Practical Suggestions to help readers put the accumulated wisdom to practical use. An annotated bibliography and endnotes sketched out the complexities beneath the simple text and pointed the way to original sources for those interested in delving deeper.

Now, with thirty years of experience in working with groups and trying to live out the principles the book puts forth, we have a 30th Anniversary Edition scheduled for publication in June. It preserves the original chapters intact, modifying some word choices to reflect recent changes in usage. Beyond that, there are new features:

The basic text of the original book provides a solid foundation, with time-tested universal principles of spiritual engagement as the building stones. The updated appendices strengthen the structure. The new material imparts a feeling of warmth and hospitality, inviting quiet introspection. This 30th ANNIVERSARY EDITION of Listening Hearts, newly retrofitted, is ready for the Spirit to carry the ministry to new horizons as days and years unfold before us.

The 30th Anniversary Edition will be available on June 17, 2021, and may be pre-ordered at this link.

Want to join the discussion?
Feel free to contribute!